Rockingham Park and Market Basket Through the Decades 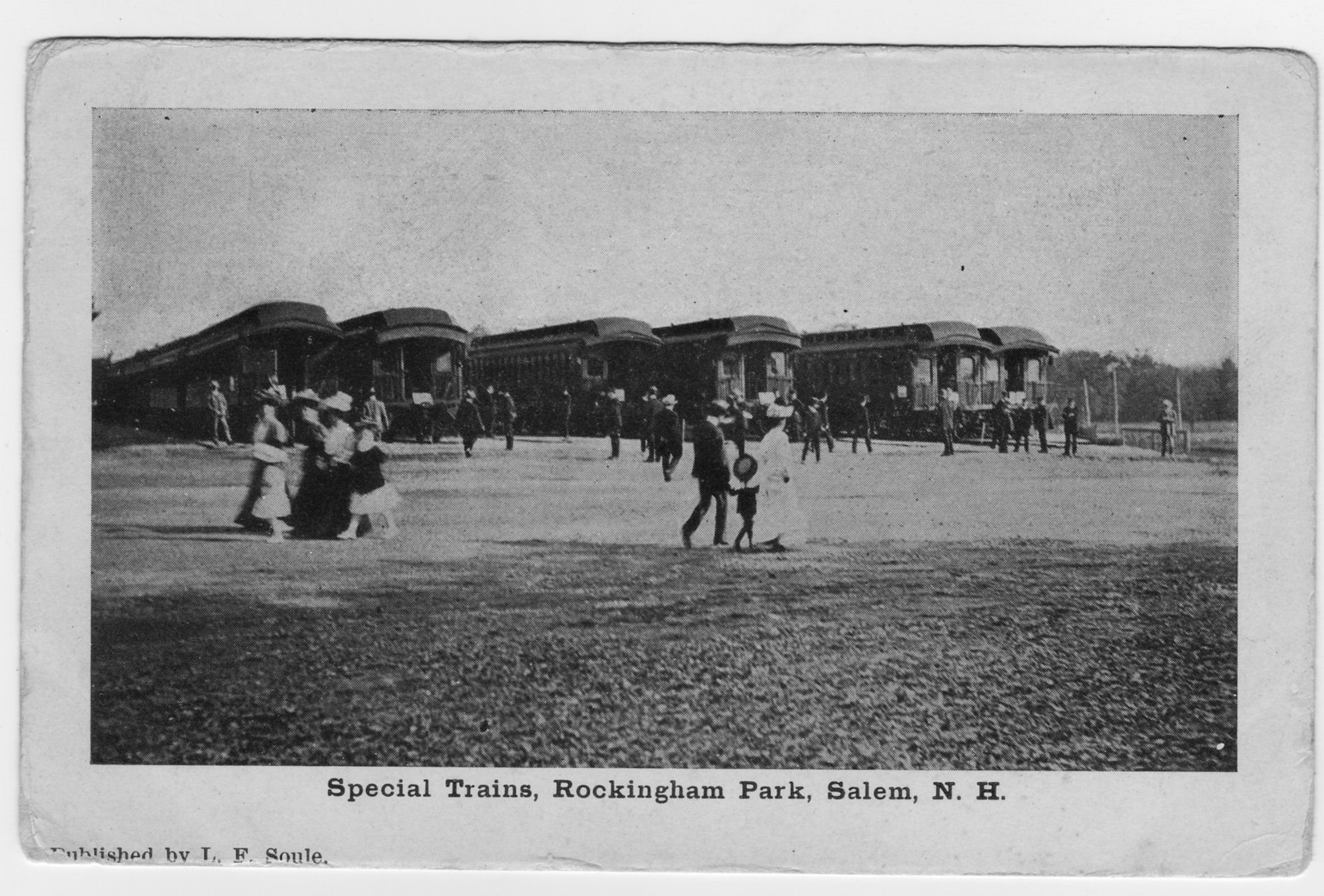 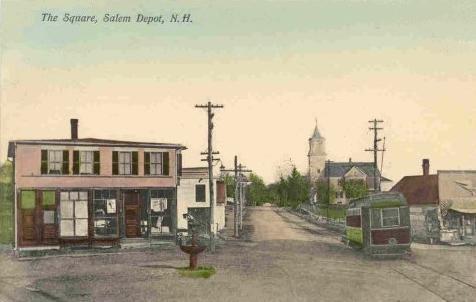 Rockingham Park opened in Salem, NH for 21 days to host a Thoroughbred meet, drawing over 10,000 spectators from Boston, Rhode Island, and New York. Although it was proclaimed the finest racecourse in the world by the public, press, and racing industry, it did not reach its full potential due to anti-gambling laws in the state. 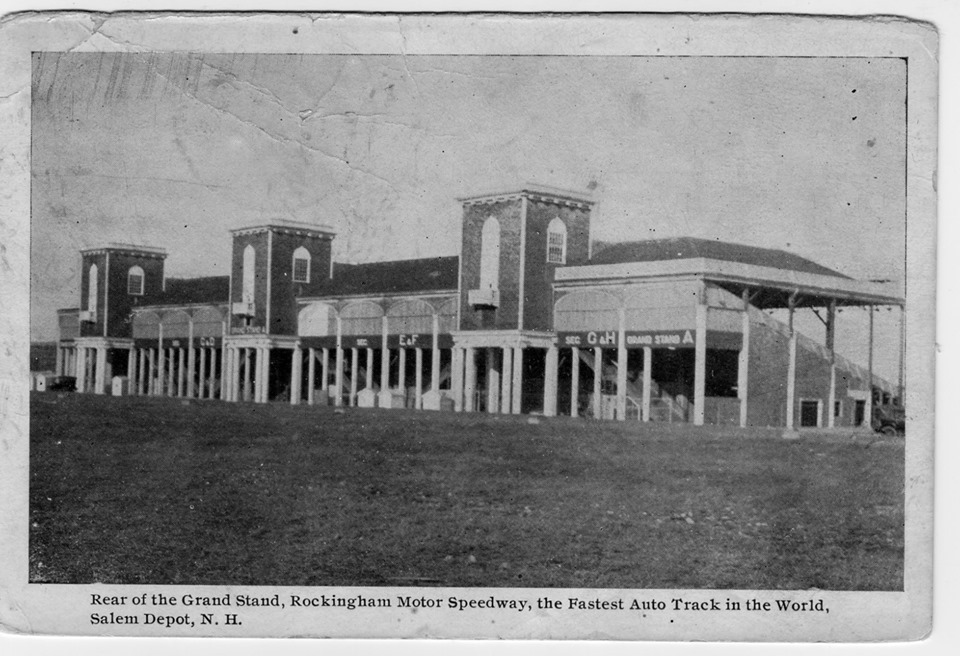 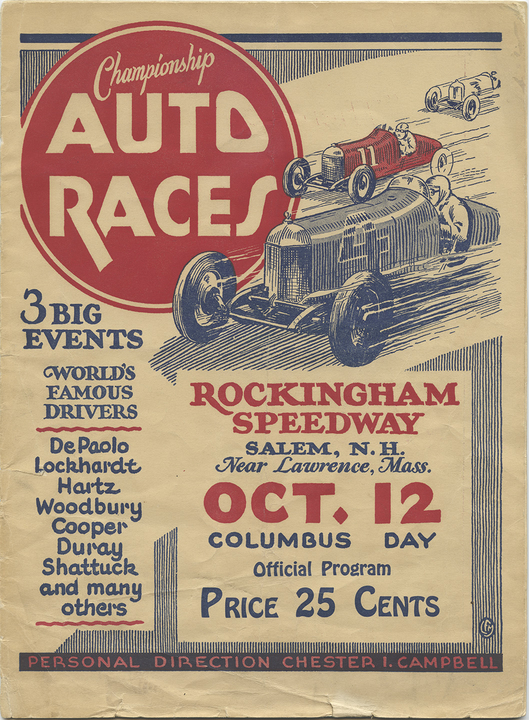 Rockingham Park hosted several historical events in its humble beginnings, from the first aviation meet in northern New England (1911) to being a military campsite during WWI. On July 4, 1925 a 100-mile auto race was held at the park’s dirt track, and the average winning speed was just 76.9 miles per hour. Motorcycle races were also held, and these became a popular attraction for a number of years. 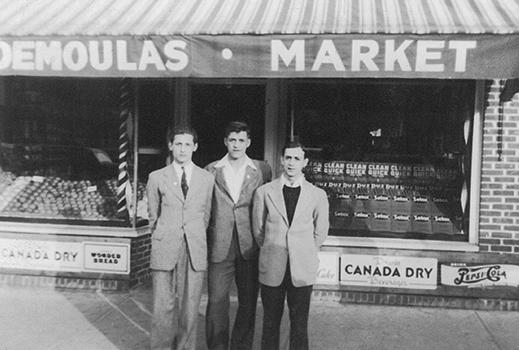 While Rockingham Park was finding its identity, DeMoulas Market was just starting out in its third year of business. The DeMoulas Market served the immigrant community in downtown Lowell, MA.

The New Hampshire Breeders’ Association purchased Rockingham Park, which had fallen into disrepair. Despite gambling being illegal, they invested $500,000 to transform the facility — a risky move during The Great Depression. With no gambling allowed, the facility was not financially tenable and the horse track was shut down. 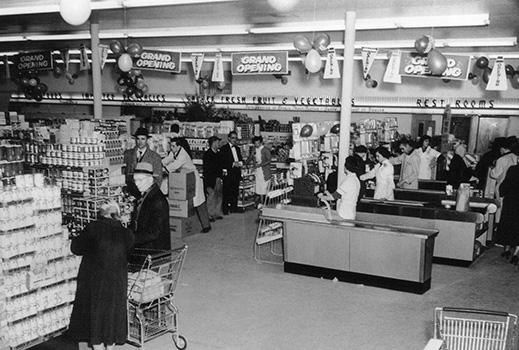 During the Great Depression, DeMoulas Market worked hard to keep their doors open. Seeing how the depression took a toll on many families, they decided to let their customers purchase groceries on credit. 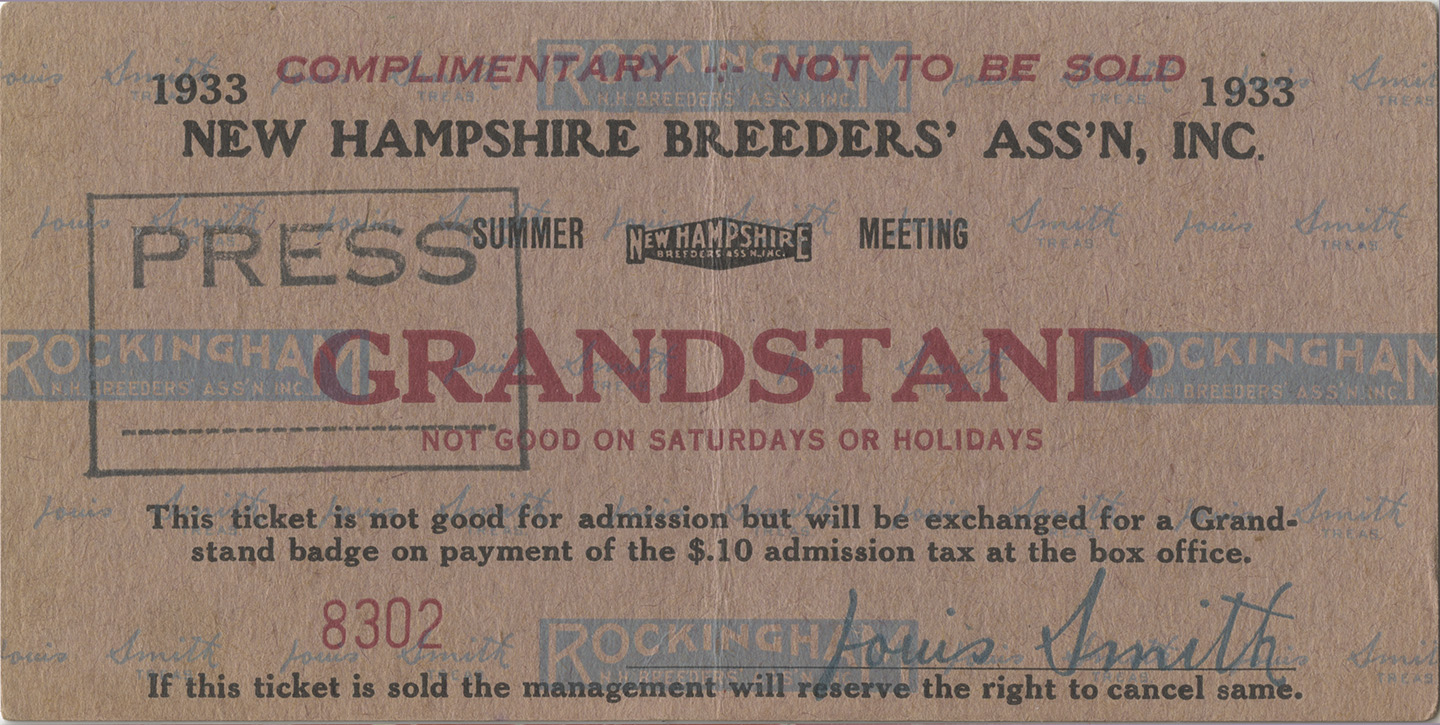 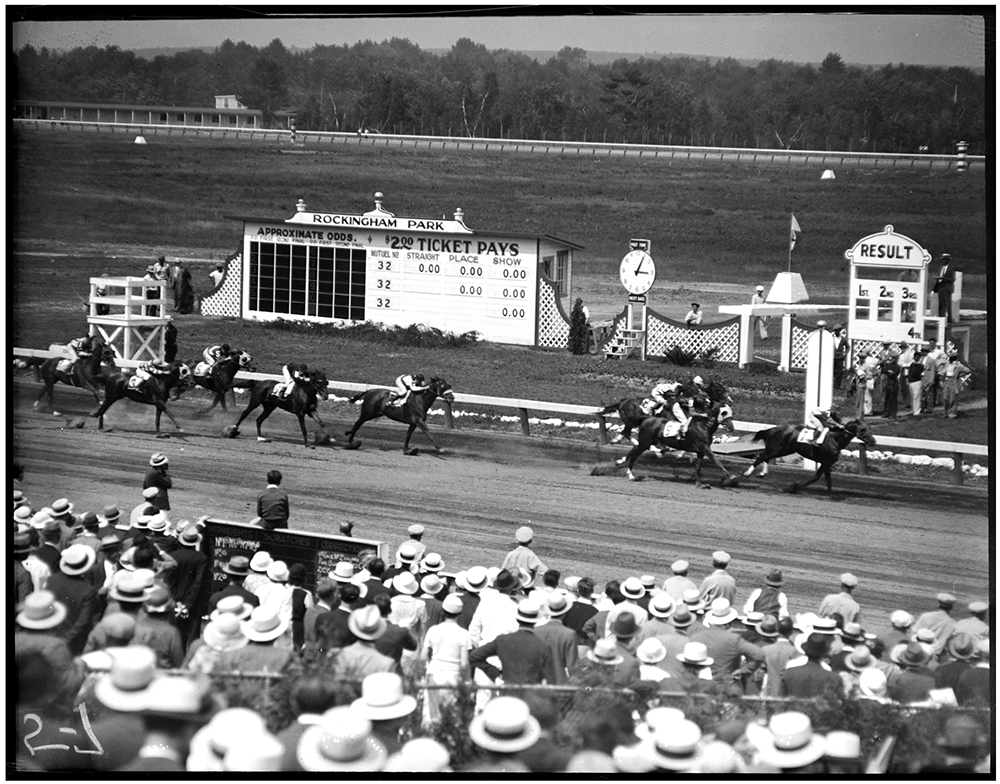 Lou Smith and Sam Simon spearheaded the comeback of Thoroughbred racing by leading relentless campaigns in state legislature. Their efforts paid off — on April 23, 1933 gambling was legalized and racing was restored.

Two months later, Rockingham Park opened for New England’s first meet and the bets were on. Over 15,000 people travelled by train and automobile to attend, and Salem flourished. The racetrack was nicknamed “The Rock” by the masses. 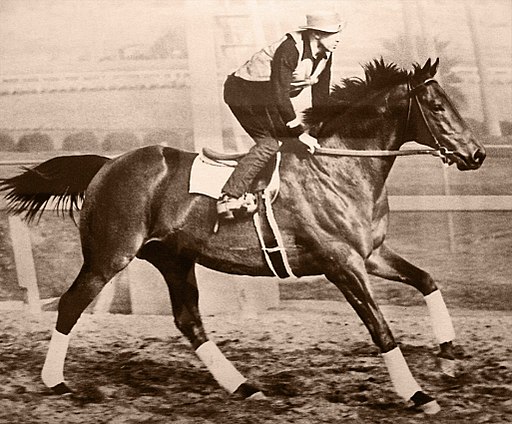 The legendary Seabiscuit was stabled at Rockingham throughout his career as a two-year-old, and he competed in 5 races here. 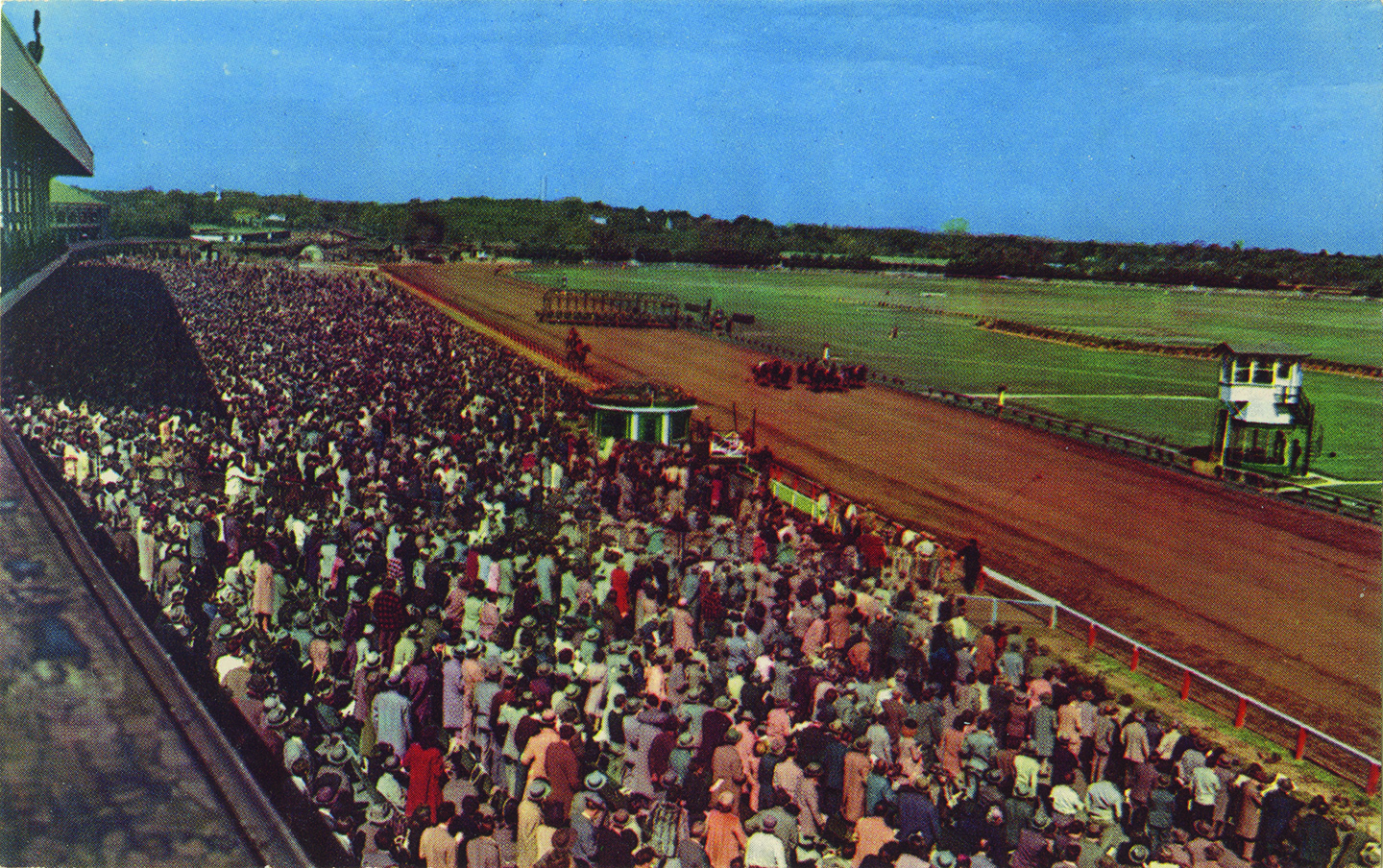 New Hampshire passed the first state-operated lottery in the United States. It was exclusive to state liquor stores and a few select locations, and the winning lottery ticket was determined by the outcome of a Thoroughbred race at Rockingham Park. 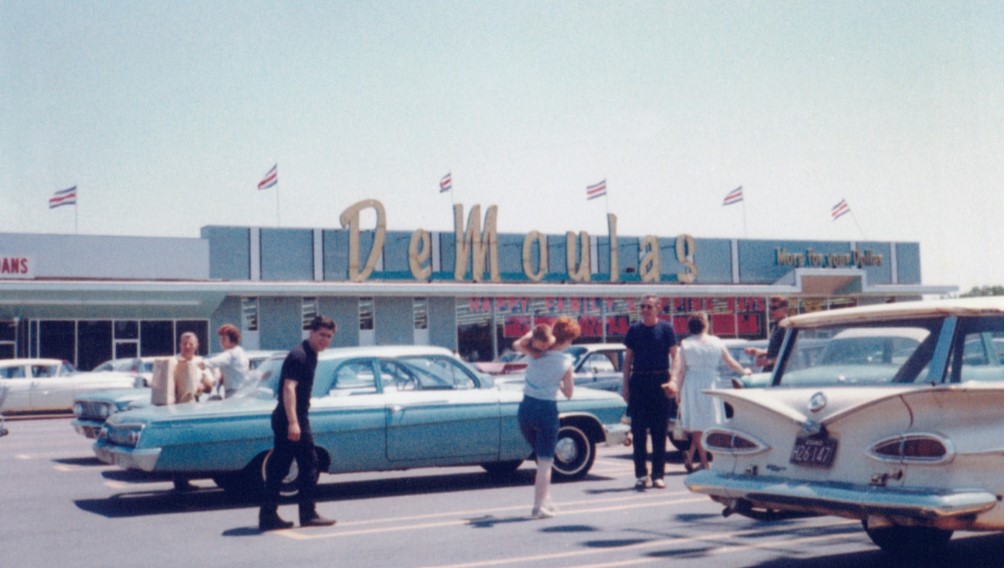 DeMoulas Markets had expanded into a supermarket chain by the 1960’s, and opened its first store in New Hampshire in July of 1964. It was the chain’s 6th store (labeled Store #6). This DeMoulas included an expansion in the Meat Department to make sausages in-store, in addition to a Yum Yum Bakery—a separate company, but having a bakery inside a supermarket was an innovative idea. 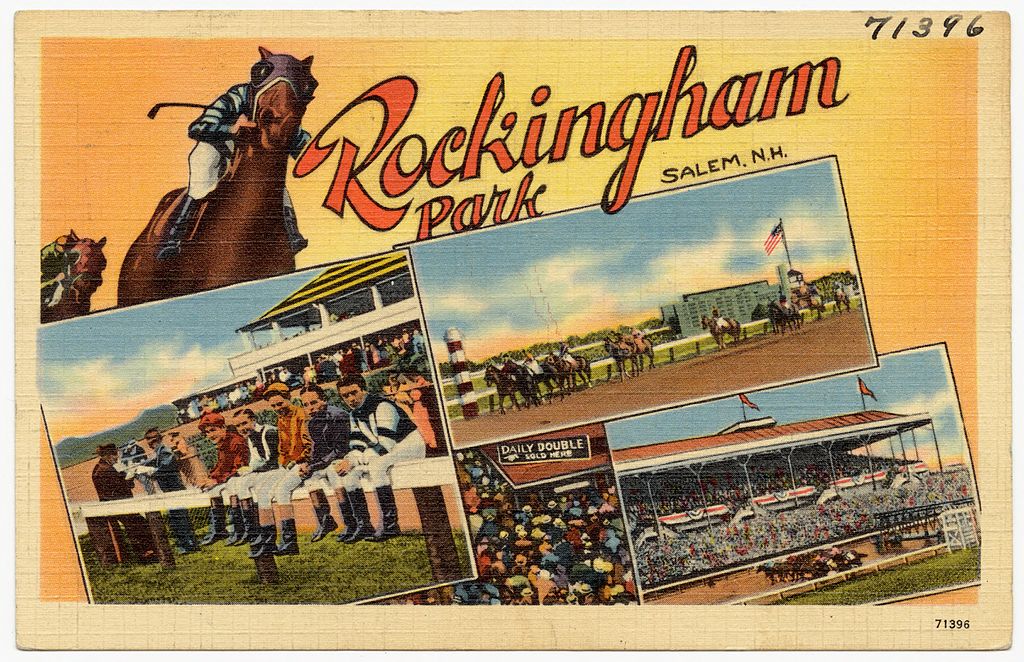 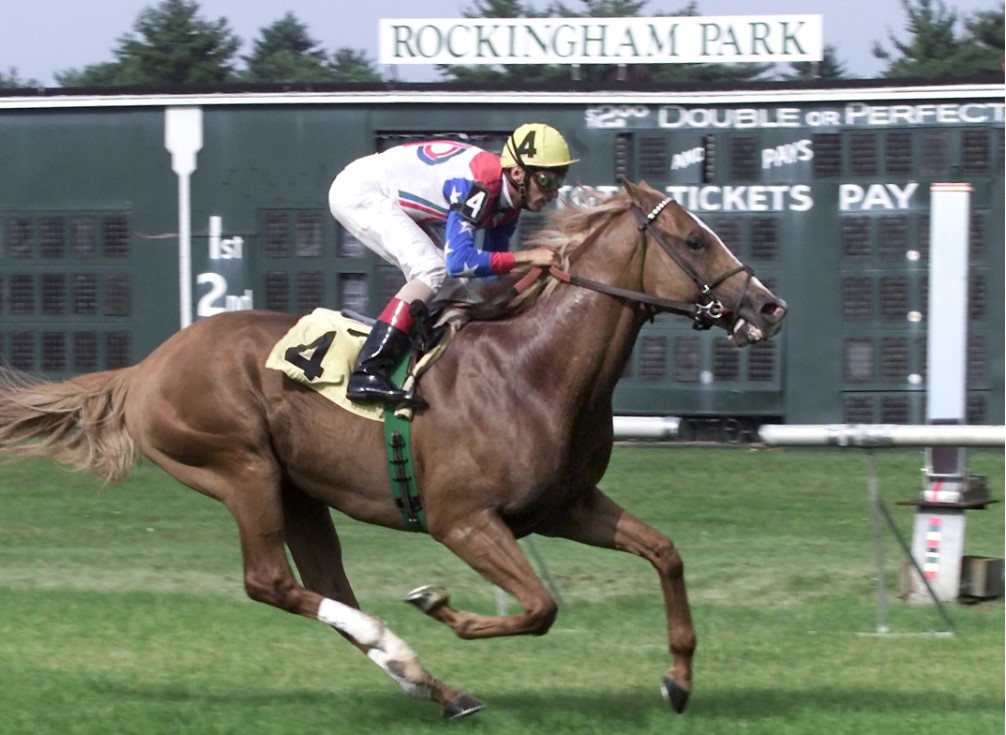 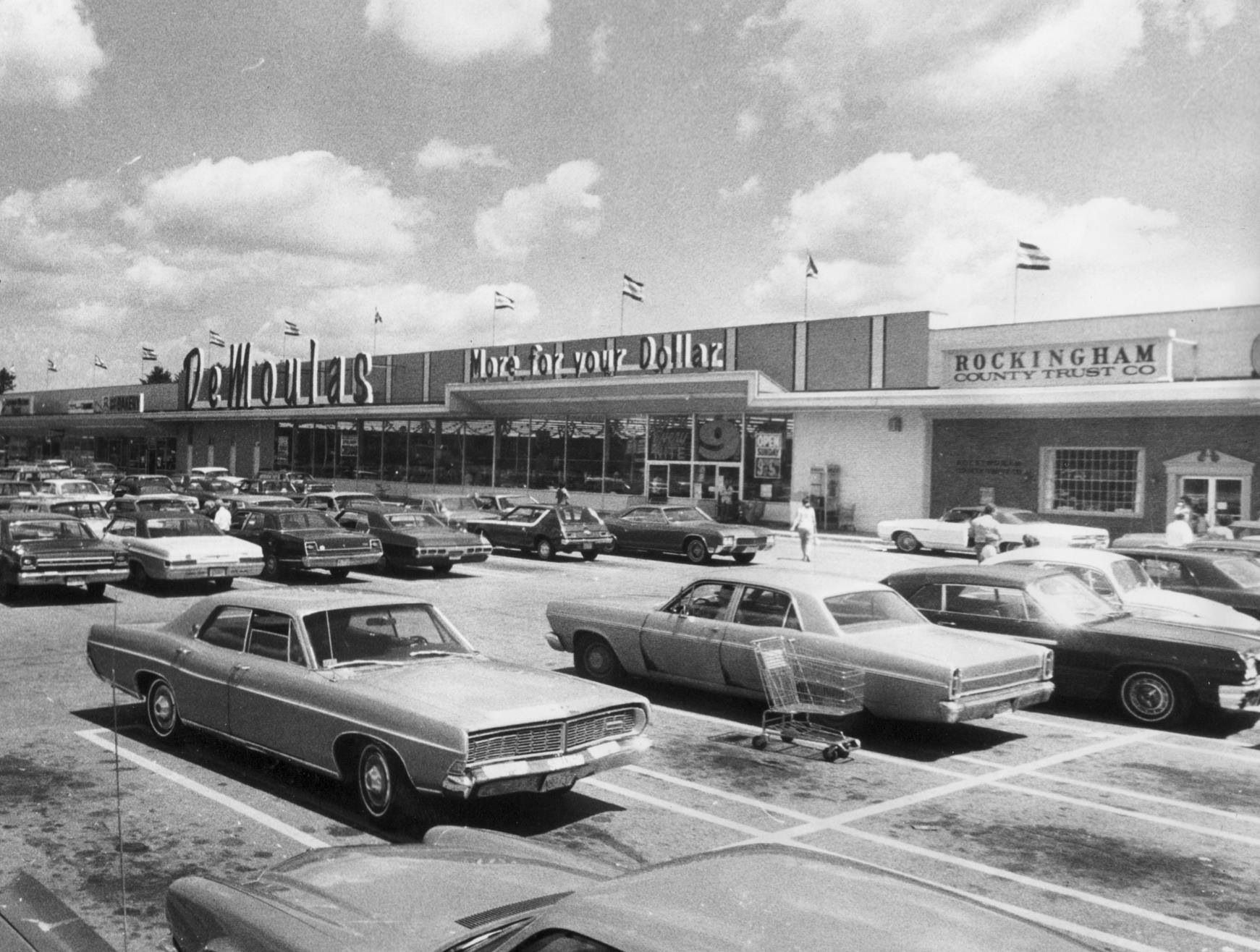 It’s off to the races for DeMoulas Markets! With a growing community in Salem, NH the company expanded Store #6 in Salem, NH to accommodate more departments and the volume of business. This DeMoulas store served the greater Salem community, and supported the growth of the town with affordable food and job opportunities. 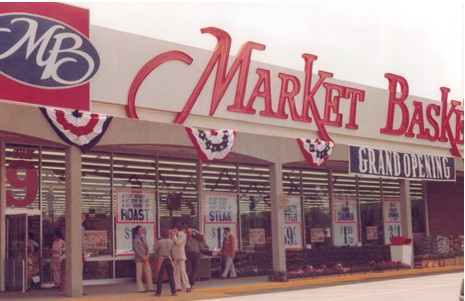 The success of Store #6 put DeMoulas Markets on track for a very special change. The company opened a second store in Salem, NH — located a quarter mile from the DeMoulas store. This was the 17th store for the chain, but was labeled #31. Instead of a DeMoulas, this store was named “Market Basket”. Thus, the first Market Basket store was opened, and this would become the banner of all of the stores today. 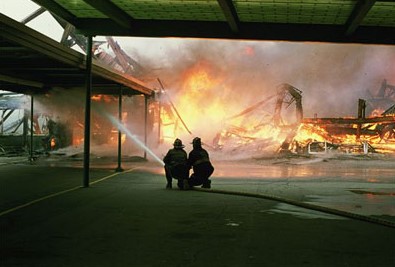 After a devastating fire destroyed the grandstand on July 29, 1980, Rockingham Park shut down for 4 years. On May 26, 1984, Rockingham Park reopened to an enthusiastic crowd of 12,843 as racing resumed for Thoroughbreds. 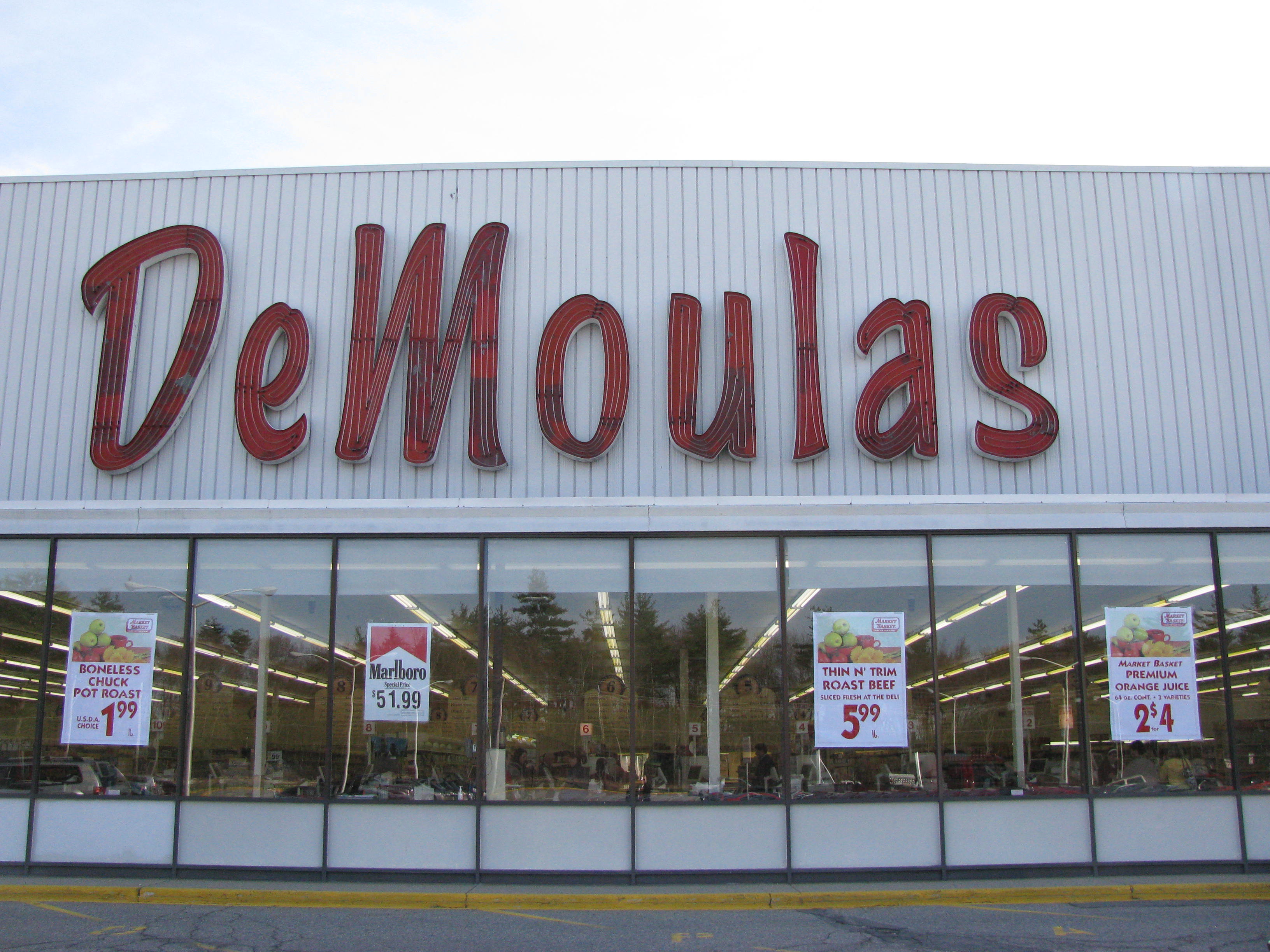 DeMoulas Store #6 expanded and remodeled the whole store once again to accommodate a growing customer base in Salem, NH.

Market Basket (Store #31) in Salem, NH expanded into a newly constructed addition to the right of the old store. This store was a lot larger than the original and included a bakery.

Market Basket (Store #31) in Salem, NH built an addition to the front of the store to lengthen the aisles and remodeled much of the store.

Rockingham Park hosted First Night to welcome the 21st Century, and the Town of Salem celebrated its 250th birthday simultaneously. That New Year’s Eve, over 10,000 people attended the indoor and outdoor festivities. 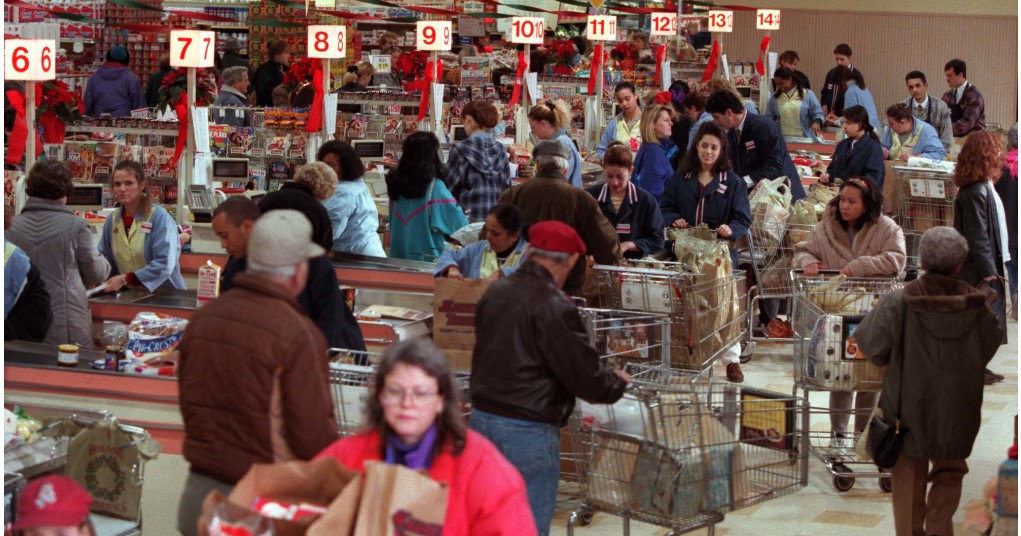 The Market Basket in Salem, NH (store #31) expanded again — this time to add more checkouts to accommodate the growing community and sales.

After many seasons of serving customers, the company refreshed its store fixtures. New produce cases and new deli cases were installed in the Market Basket in Salem, NH (store #31). 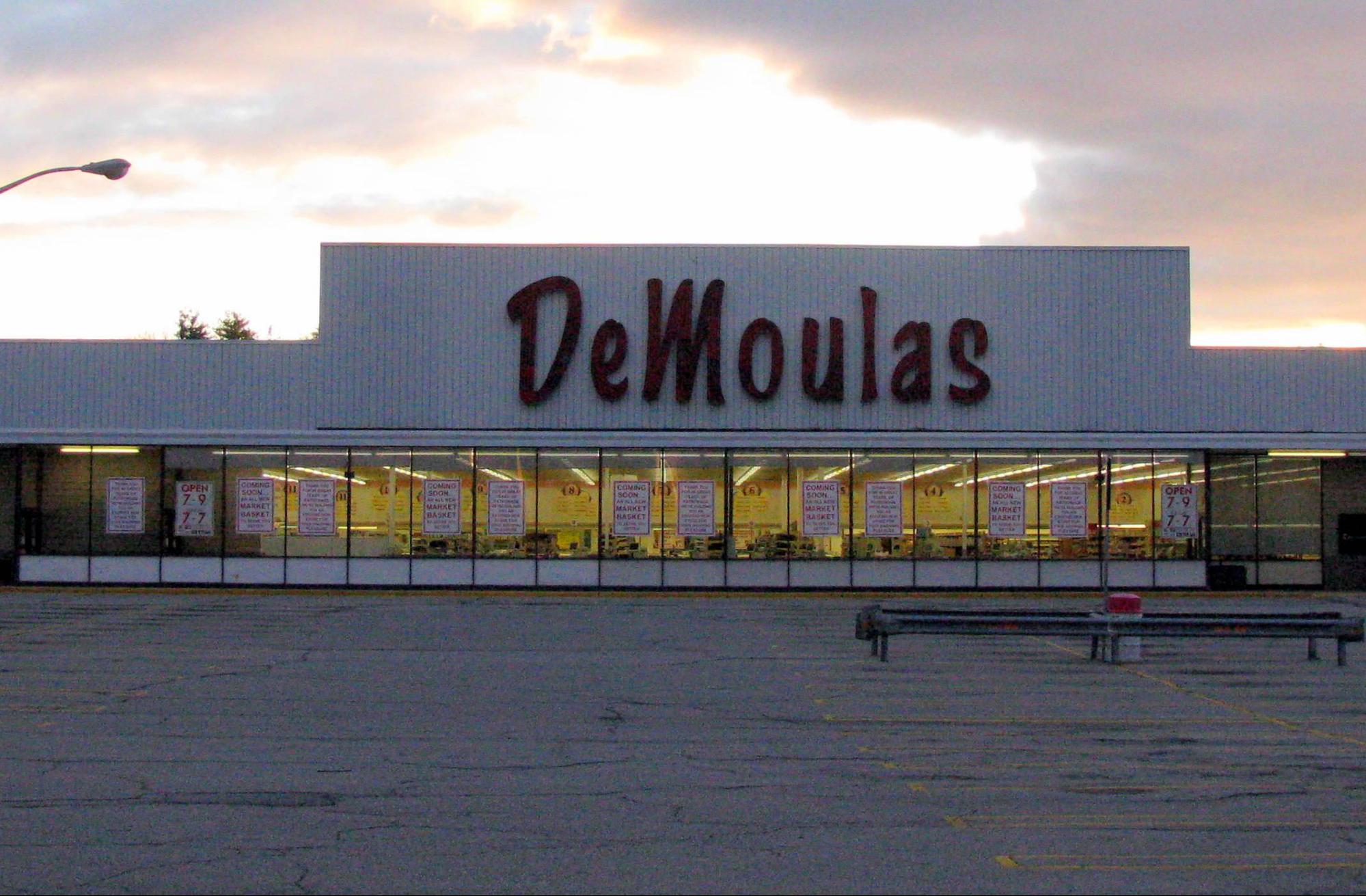 In April 2010, the DeMoulas store in Salem, NH closed so that a new store could be built in its place. This was the last store to be named DeMoulas. A temporary store was opened for 6 months on the other side of the plaza, the size of a convenience store. 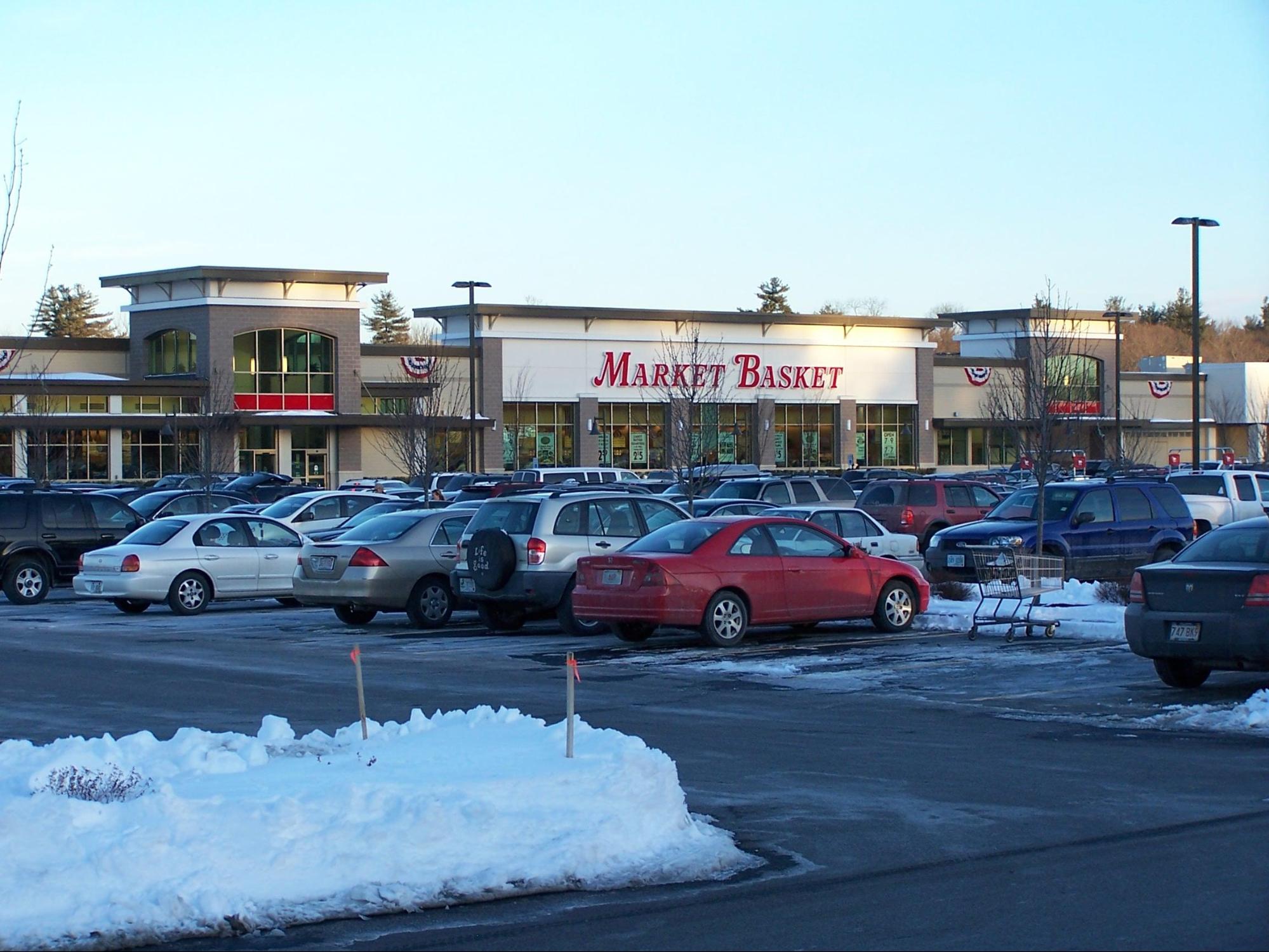 The new store replacing the DeMoulas — now named Market Basket — opened in the middle of a blizzard. Classic, New England! The new store includes a full Kitchen, Café and seating area. What’s more, it is almost 91,000 square feet to accommodate a large customer base.

It’s the end of an era — Rockingham Park reached its finish line after 110 years in business. It closed its doors and was sold for redevelopment. 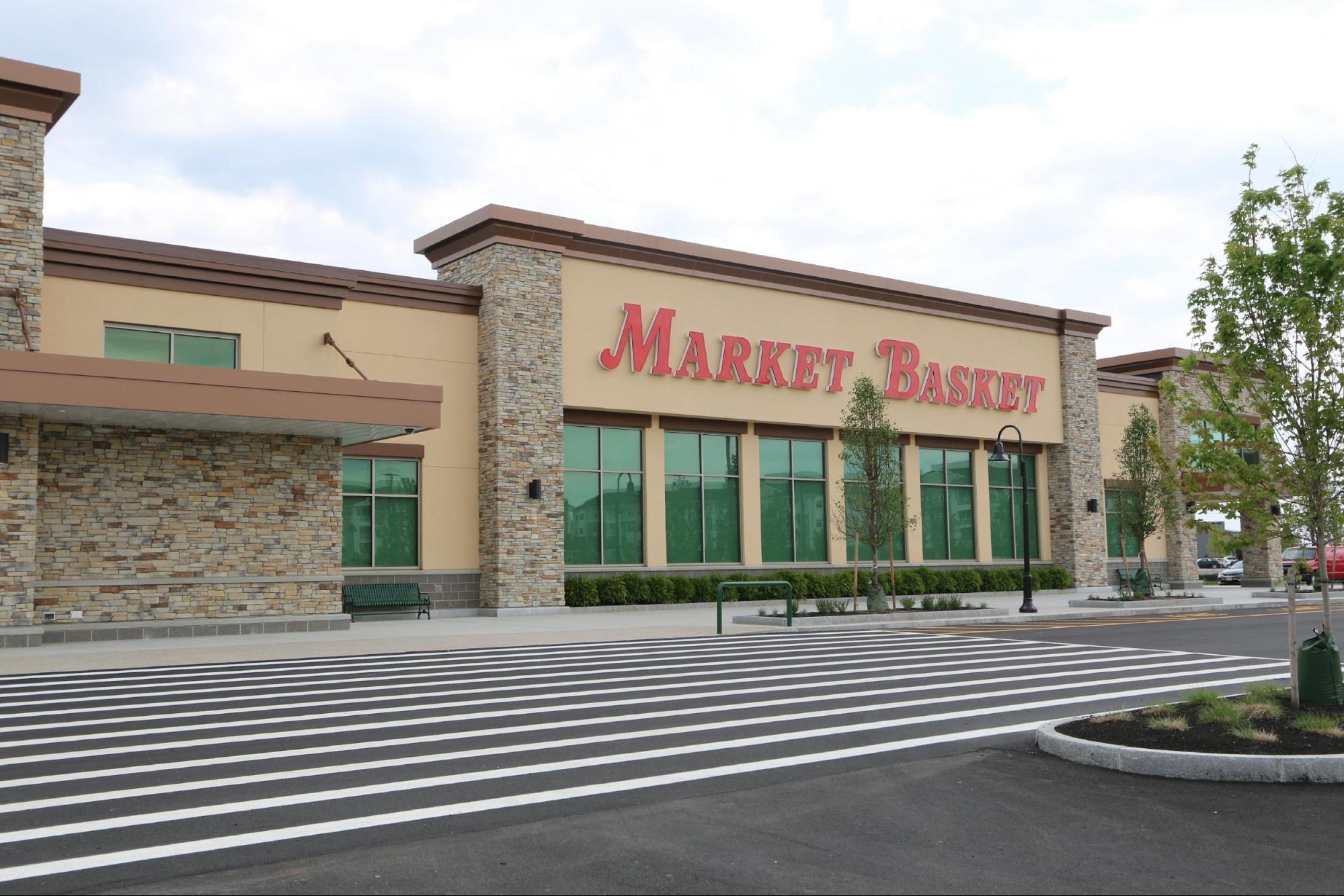 Here’s to a new chapter! This summer, Rockingham Park is transformed into Tuscan Village where it will serve as a downtown area for contemporary Salem, NH. Over the decades, Market Basket has evolved alongside Rockingham Park to enrich Salem and the surrounding communities. This new store is the chain’s 80th store and is labeled store #84.

The Market Basket team looks forward to serving loyal customers from the Salem community at the Tuscan Village North (the former Rockingham Park) and continuing the tradition of "More For Your Dollar" shopping.

Sign up to receive our weekly flyer and special features. Learn More »